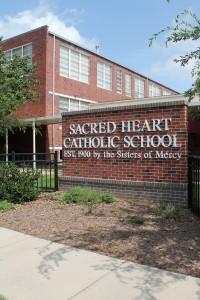 The Sisters of Mercy arrived at the school in September, 1902. The first senior class graduated from Sacred Heart Catholic School in 1908. Construction on the current Sacred Heart Catholic Church began in 1927. The current elementary school building was completed in 1951, and the convent, now used for the administrative offices and the elementary art room, was built in 1959. A gymnasium was added to the campus in 1954. When the high school closed due to low enrollment, the Class of 1966 was the last to graduate. Thereafter, Sacred Heart only offered classes through the 8th grade.

In 2004, the Diocese of Biloxi granted Sacred Heart Catholic School permission to reopen its high school under the guidance of Principal Maribeth Andereck. 9th and 10th grades were added at the current elementary school site. Despite the devastating effects of Hurricane Katrina in 2005, 11th grade was added this same year. 2006 saw the addition of 12th grade, and the existing school campus underwent a complete renovation, including the addition of eight modular buildings and a 7,000 square foot cafeteria. The Class of 2007 was the first senior class to graduate from Sacred Heart in 41 years. This small class of nine students paved the way for many more high school students to learn, grow, and graduate from Sacred Heart.

To relieve space issues due to burgeoning enrollment, Sacred Heart purchased the former First Baptist Church from the city of Hattiesburg in 2010 to house its high school students (7th-12th grades). Classes began in this new location in August 2010. This 90,000 square foot structure provides a wealth of space for students and long-term stability for the school as an anchor in downtown Hattiesburg. In 2016, construction of Sacred Heart’s San Antonio Foundation outdoor athletic facility was completed. This complex features state-of-the-art baseball, football, soccer and softball fields. In 2021, Sacred Heart’s graduating class of 47 students earned an average ACT composite score of 25.7 and  garnered over $4.4 million in scholarship offers. This class was critical to the school’s 2021 state championship titles in the Mississippi Bar Association’s High School Mock Trial Competition, the Mississippi High School Activities Association’s (MHSAA) 1A/2A/ Golf Competition, and the 1A/2A MHSAA Tennis Competition.

With an average annual enrollment of more than 650 students from pre-kindergarten through 12th grade, and growing graduating classes each year, Sacred Heart is in the midst of its most successful time as a school. Once again, we thank God for the vision of Father Sylvester Greimel and the Sisters of Mercy. We are proud that Sacred Heart is a church with a school, not a school with a church. We thank God and all those whom God has worked through and will continue to guide in the coming years for “good ole Sacred Heart.”