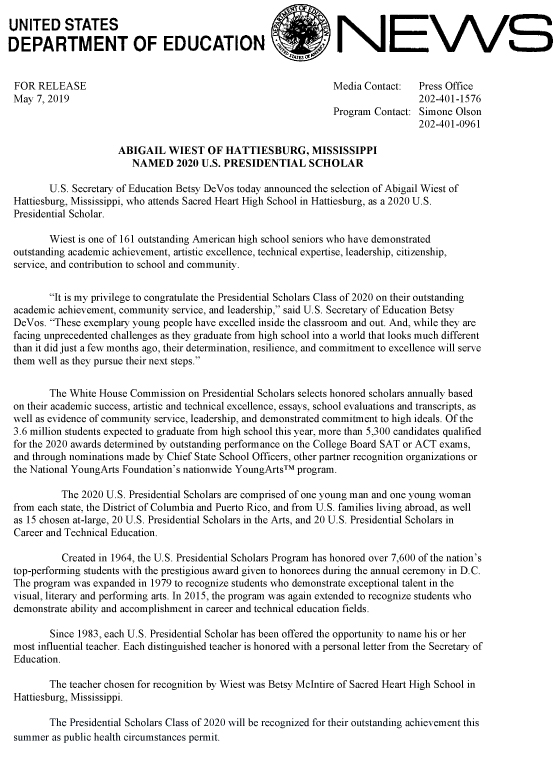 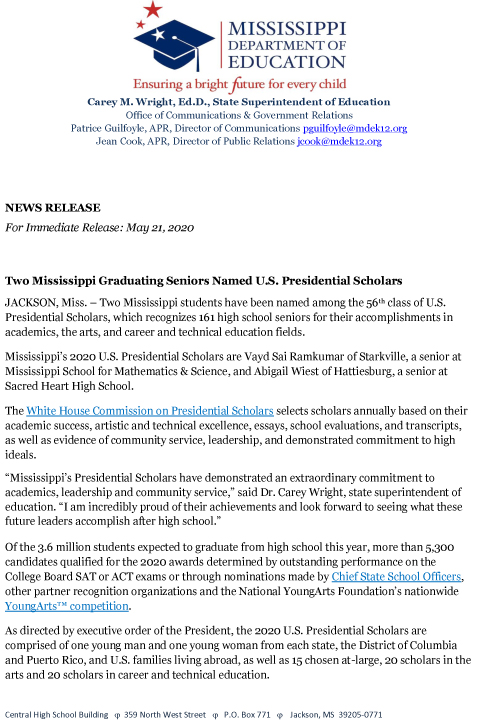 Created in 1964, the U.S. Presidential Scholars Program has honored over 7,600 of the nation’s top-performing students. The program was expanded in 1979 to recognize students who demonstrate exceptional talent in the visual, literary and performing arts. In 2015, the program was again extended to recognize students who demonstrate ability and accomplishment in career and technical education fields.
The Presidential Scholars Class of 2020 will be recognized for their outstanding achievement this summer as public health circumstances permit.
A complete list of 2020 U.S. Presidential Scholars is available at http://www.ed.gov/psp.

Abigail Wiest, a graduating senior at Sacred Heart Catholic School, has been named one of 62 semifinalists in the 2020 U.S. Presidential Scholars Program. The semifinalists were selected from nearly 5,600 candidates expected to graduate from U.S. high schools in the year 2020.

Inclusion in the U.S. Presidential Scholars Program, now in its 56th year, is one of the highest honors bestowed upon graduating high school seniors. Scholars are selected on the basis of superior academic and artistic achievements, leadership qualities, strong character, and involvement in community activities.

The U.S. Presidential Scholars Program was established in 1964 by Executive Order of the President to recognize some of our nation’s most distinguished graduating for their accomplishments in many areas: academic success, leadership, and service to school and community. It was expanded in 1979 to recognize students demonstrating exceptional scholarship and talent in the visual, creative, and performing arts. In 2015, the program was expanded once again to recognize students who demonstrate ability and accomplishment in career and technical fields. Annually,  up to 621 U.S. Presidential Scholars are chosen from among that year’s senior class, representing excellence in education and the promise of greatness in America’s youth. All Scholars are invited to Washington, DC in June for the National Recognition Program, featuring various events and enrichment activities and culminating in the presentation of the Presidential Scholar Medallion during a White House-sponsored ceremony.

A distinguished panel of educators have reviewed these submissions and selected 621 semifinalists. The Commission on Presidential Scholars,  a group of eminent citizens appointed by the President, will select the finalists, and the U.S. Department of Education will announce the Scholars in May.

Scholars will be invited to Washington, DC, for several days in June to receive the Presidential Scholar Medallion at a recognition ceremony and to participate in events and activities.

Abigail Wiest has been named STAR Student for the 2019-2020 school year by the Mississippi Economic Council (MEC) M. B. Swayze Foundation, sponsor of the Student Teacher Achievement Recognition (STAR) program. This year will mark the 55th Anniversary of the STAR program. Established by the Mississippi Economic Council in 1965, the purpose of the STAR program is to recognize outstanding students and teachers in Mississippi.

This year, over 660 STAR Students and STAR Teachers will receive this prestigious recognition from MEC’s M.B. Swayze Foundation.

Abigail Wiest was born in Hattiesburg, Mississippi to Dr. Andrew and Jill Wiest. She has attended Sacred Heart since Kindergarten and is graduating as Salutatorian of the Class of 2020. Abigail plans to attend the University of Alabama in the fall. She is also graduating as a National Merit Finalist, a National Merit Scholar, a Master AP Scholar, a Mississippi Scholar, and with special honors. Throughout her high school career, Abigail has participated in varsity cheerleading, basketball, and softball. She has also been a part of National Honor Society, National Society for High School Scholars, Senior Beta Club, the 30+ ACT Club, Mu Alpha Theta, and the Retreat Team. Abigail has also participated in National History Day, winning four state titles for the individual documentary category, as well as awards for oral history. She has published a documentary in the International Journal of Naval History, and she has published a podcast in Mississippi Moments through the University of Southern Mississippi and Mississippi Public Broadcasting. Abigail was junior homecoming maid last year.